Through its GGPM Program, GGGI adopted one of the most thorough processes available to design the Green Growth Index. It went through a series of revisions to improve the conceptual and methodological frameworks through multiple iterative steps, including expert consultations, assessment of expert feedback, and índex development and improvement (Figure 5).

GGGI’s GGPM team pursued two complementary strategies to enhance the practical utility of the Green Growth Index in policy decision-making: a stepwise scientific approach and a consultative process involving experts and stakeholders. The former involves rigorous research to understand the complexity and multidimensionality of green growth, while the latter entails consultations to understand the national and regional contexts that influence green growth policies. Three types of consultations were conducted in the process of developing the Green Growth Index: in-country stakeholder workshops, regional consultation workshops, and international expert meetings (Figure 5). Each of these consultations had different objectives and groups of participants.

Compared to other green growth-related indices, such as the Asian Development Bank’s (ADB) Inclusive Green Growth Index, African Development Bank’s (AfDB) African Green Growth Index, the United Nations Environment Programme’s (UNEP) Green Economy Progress Index, and the Dual Citizen LLC’s (DC) Global Green Economy Index), GGGI has arguably conducted one of the most systematic and wide-reaching consultations to ensure the policy relevance of the indicators and targets included in the frameworks for the index.

GGGI kicked off the design process in 2016 and its activities were completed in early 2019 (Figure 5), with the final framework for the Green Growth Index planned as the final output of the process. Consultants from Vivid Economics and the Economist Intelligence Unit (EIU) developed the initial or first draft frameworks for the Green Growth Index, with significant scientific inputs from GGGI and other international experts. The chronicle of activities and the different levels of consultations conducted with different groups of experts since 2017 can be grouped into three phases (Figure 6), of which highlights are presented below. A detailed discussion of the results of the expert consultations are available elsewhere (Acosta et al., 2019; Peyriere & Acosta, 2019).

Phase 1 (2017): GGGI applied the initial frameworks on a pilot version of the Green Growth Index and Simulation Tool, covering 34 GGGI member and partner countries. The concept was framed using a matrix that defined green growth according to five dimensions — resource efficiency, optimal utilization of natural assets, resilience to risks, economic opportunities, and social inclusion — and six sectors or thematic areas, namely energy, transport, cities, industry, water, and agriculture, forestry and other land use (AFOLU). The matrix at the time represented 39 green growth indicators (Acosta et al., 2019). A set of sectoral models formed the basis for the methods that allows an interactive link between the Index and Simulation Tool. The Tool allows the Index users to enhance their knowledge on how implementing different policy options influences a country’s green growth performance. GGGI built the frameworks on both scientific evidence and expert judgement. The pilot version runs in Excel. 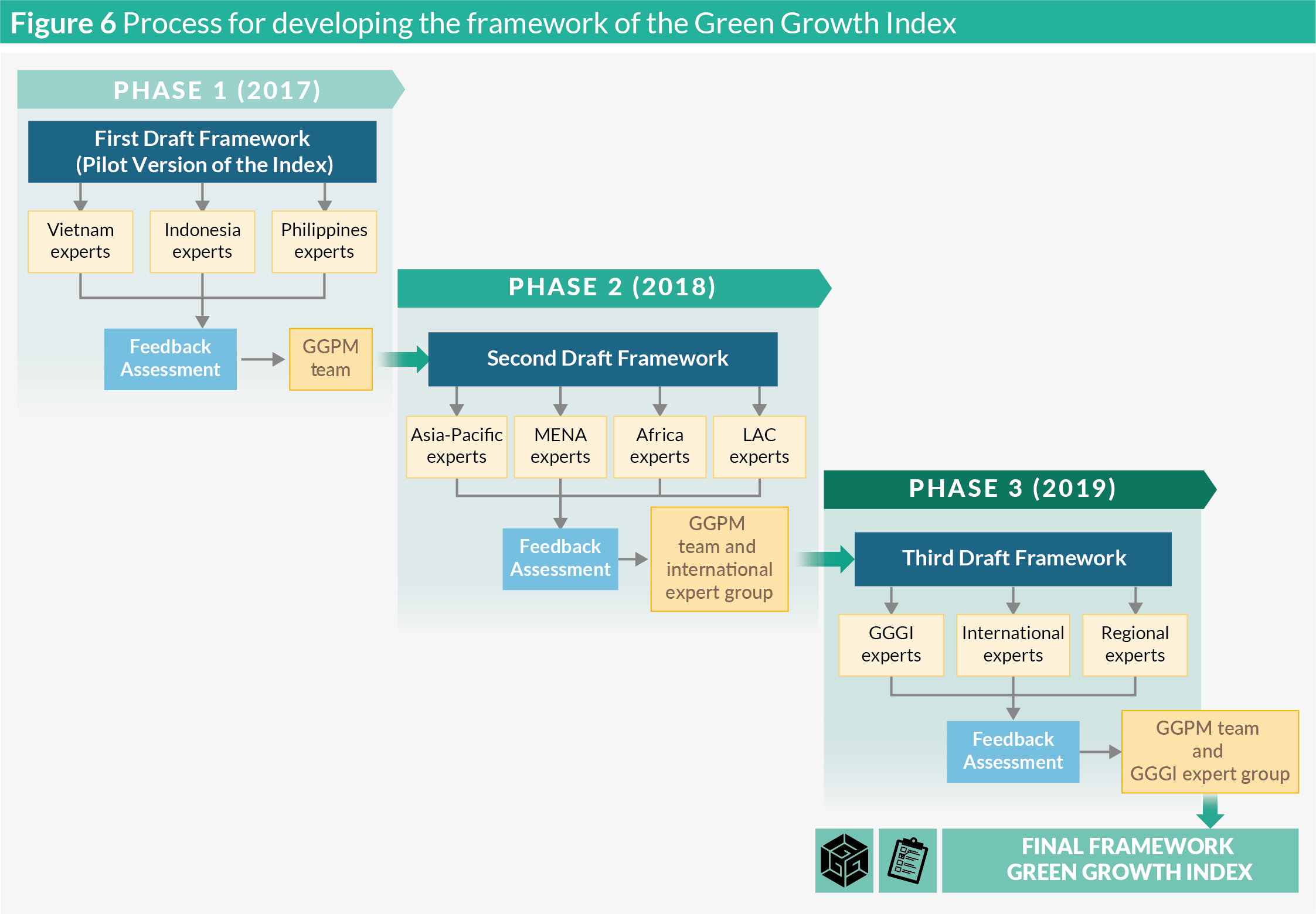 Both the index and the tool were presented in an international expert workshop, three in-country stakeholder workshops, and an international stakeholder consultation during GGGI’s Global Green Growth Week in Addis Ababa, Ethiopia, in October 2017. The in-country workshops were held in Hanoi, Vietnam, on July 6; in Jakarta, Indonesia, on July 11; and in Palawan, Philippines, on July 27. These consultative activities aimed to inform GGGI member countries about ongoing initiatives to develop and collect feedback on the concepts and methods of index and the tool. Although GGGI’s initiatives were highly commended during the workshops and consultation, the feedback suggested the need to improve the frameworks. Concerns were raised regarding missing indicators for social inclusion, the lack of subindices for green growth dimensions, and limited country coverage.

Phase 2 (2018): The assessment of feedback from stakeholders workshops revealed two major revisions that were necessary to improve the initial conceptual and methodological frameworks of the Index: to revise the matrix approach and to decouple the index from the tool. The first revision allowed the inclusion of indicators that cut across different sectors and shifted the focus of the concept from economic sectors to green growth dimensions (Acosta et al., 2019). The total number of indicators became 36. As in the first draft, the selection of additional indicators for the Green Growth Index in the second draft framework was based on both scientific evidence and expert judgement. The second revision entailed applying a separate method to the Green Growth Index to allow the addition of countries using national-level indicators that are available online. It was determined that adding countries to the Simulation Tool would require a longer transition due to the time required to collect a large number of model parameters and policy data for the new indicators. Thus, in 2018, GGGI emphasized revisions to the Green Growth Index. A major development of the Simulation Tool is envisaged for 2020.

GGGI presented the second draft framework for the Green Growth Index at two international expert meetings and four regional consultation workshops. These presentations aimed not only to gather feedback on the policy relevance of the indicators and on setting priorities and targets for those indicators, but also to provide a platform for dialogue and interaction that ensured a transparent process for improving the concept and methods of the index. The first international expert meeting was conducted 7-8 June in Geneva, Switzerland, in partnership with the Green Growth Knowledge Platform (GGKP) Working Group on Metrics and Indicators.

In the regional workshops, the main participants were government officials who are working on or have expertise in green growth issues, many of whom have a working relationship with GGGI country offices. Experts from other international organizations and research institutions that are supporting green growth knowledge generation, planning, policy development, and investment in GGGI member countries and partners also participated in the workshops. GGGI held the regional workshops 23-24 August in Bangkok, Thailand, for the Asia-Pacific region; 16-17 September in Dubai, UAE, for the Middle East and North Africa (MENA) region; 20-21 September in Addis Ababa, Ethiopia, for the Africa region; and 4-5 October in Mexico City, Mexico, for the Latin America and the Caribbean (LAC) region. These workshops were conducted in close collaboration with several partner organizations, including the United Nations Economic and Social Commission for Asia and the Pacific (UNESCAP) in Bangkok, and the Ministry of Climate Change and Environment in Dubai, and the Ministry of Environment in Mexico City, respectively. Eighty-six experts from 28 countries participated in the workshops, about 74 percent of whom work for the government. Other invited experts from 14 countries were not able to participate mainly due to scheduling conflicts or other competing government priorities at the time of the workshops.

A systematic assessment of the feedback given on indicator relevance and priorities during the regional workshops revealed five key challenges to address in order to enhance the policy relevance of the green growth conceptual framework. These challenges include the (i) lack of direct relationships of indicators to green growth; (ii) overlaps of the frameworks with other multidimensional concepts; (iii) diversity in institutional, economic, and environmental conditions across regions; (iv) insufficient coverage in thematic dimensions; and (v) concerns on the quality of data and their methodologies (Acosta et al., 2019).

The results of the assessment of the regional expert feedback were presented and discussed 4-6 December during the second international expert meeting in Rome, Italy, which was conducted in partnership with the Food and Agriculture Organization of the United Nations. The outcomes of the discussion during this meeting were considered in developing the third draft framework of the Green Growth Index. The main revisions to the second draft framework included the modifications of indicators in all green growth dimensions and the removal of the dimension on resilience and risks (Acosta et al., 2019). The main reasons for the latter were the lack of relevant indicators for this dimension; an overlap with other indices on vulnerability, such as the Notre Dame Global Adaptation Initiative or ND-Gain; and the complex interpretation of the Green Growth Index because resilience is by itself a multidimensional concept. The international experts suggested removing resilience and risks from the green growth framework and conduct a separate analysis to establish links to resilience and risks for the index in the future. Phase 3 (2019): The third draft framework was presented in a draft technical report on the concept, methods, and applications of the Green Growth Index prepared in May 2019. To collect expert feedback and allow systematic assessments of the conceptual and methodological frameworks, the GGPM team prepared a semi‑structured questionnaire to guide the experts in reviewing the report. The questionnaire, which was circulated to the expert reviewers as an online survey from April to June, was divided into six parts:

The expert reviewers consisted of international and regional experts who participated in the international meetings and regional workshops in 2018, other experts who were invited but not able to attend these meetings and workshops, and GGGI experts at headquarters and country offices. In addition to the online survey, the GGPM team conducted two types of consultations:

The consultations in June were an important step in finalizing the framework of the Green Growth Index because the intermediate assessment of the online survey revealed that many experts were not knowledgeable on the sustainability targets used in the draft technical report.

The final framework presented in Figure 1 and discussed in detail in Chapter 4 was based on the results of the assessments of the expert feedback on the draft technical report and consultations with experts on GGGI thematic areas and sustainability targets. A comparison of the indicators in the final framework to the draft frameworks in phases 1, 2 and 3 of the índex development process is available in Peyriere and Acosta (2019). Many of the indicators in the third draft framework were adopted in the final framework because they were highly rated by the experts (Peyriere & Acosta, 2019). Only few indicators were excluded from the final framework due to very low ratings as in the case of CO2 emissions per million people employed (Figure 7); others were replaced by indicators from the United Nations Statistics on SDG indicators1 and have information on targets, such as the ratio of total primary energy supply to GDP and share of renewable to total final energy consumption). Some were added due to relevance of the indicator to GGGI’s thematic areas, such as soil organic carbon content, and soil biodiversity. An important improvement of the final framework is the addition of a fourth indicator category in the natural capital protection and social inclusion dimensions, namely cultural and social value to align to the goals of the Intergovernmental Science-Policy Platform on Biodiversity and Ecosystem Services (IPBES) and gender balance to align to GGGI’s emphasis on this issue in its country programs, respectively (Figure 1).