The four dimensions of green growth are closely interlinked. Efficient and sustainable resource use entails more productive use of natural resources and more cumulative economic value with less resources (ECN, 2013:p.3) and without endangering needs of future generations. It focuses on physical resources, such as water, energy, land, and materials but also on ecosystem services (ECN, 2013; Flachenecker & Rentschler, 2018). These are natural capital, which consists of living and nonliving components of ecosystems that people use to produce goods and services (Guerry et al., 2015). Natural capital provides basic conditions, such as fertile soil, multifunctional forests, productive land and seas, good quality freshwater and clean air, and pollination (EEA, 2015). Without natural capital protection, these conditions that support ecosystem services are at risk. Green growth emphasizes the role of natural capital in generating new sources of growth and expanding economic opportunities in the form of green investment and jobs, among other opportunities (OECD, 2011). This new model of growth focuses on people (Bass et al., 2016), where social inclusion becomes a key mechanism to ensuring people’s contribution to, sustaining opportunities, and distributing benefits from economic growth. Chapter 4 discusses further details on the relevance of the dimensions to green growth. The scores for the Green Growth Index and its dimensions range from 1 to 100, with 1 having the lowest or very low performance and 100 having highest or very high performance (Figure 2 and Figure 3). Because the indicators are benchmarked against sustainability targets, namely the SDGs, other globally agreed targets, and top country performers, a score of 100 in the index, dimensions, and indicator categories means that a country has reached a given target. The scores are classified in a given range and can be interpreted as follows:

Several countries, albeit mainly developed ones, have reached the goals for social inclusion (Figure 2). Many countries in Africa have low scores and thus continue to lag behind other regions in achieving targets for this dimension, which include indicators on access to basic services, gender balance, social equity, and social protection. Performance in achieving targets in natural capital protection is relatively better for many countries across regions, including Africa, with scores ranging from moderate to high. This dimension covers indicators on environmental quality, GHG emissions reduction, biodiversity and ecosystem protection, and cultural and social value. Only very few countries perform well on efficient and sustainable resource use, which include the Congo Republic, Gabon, and Chad in the African region (see chapter 6.3). These African countries have high to very high scores on the share of renewable to total final energy consumption and share of freshwater withdrawal to available freshwater resources, reaching the sustainability targets of 51.4 percent (Sachs, Schmidt-Traub, Kroll, Lafortune, & Fuller, 2019) and 25 percent (FAO, 2017), respectively. Their scores on total domestic material consumption per unit of GDP and total material footprint per capita are likewise very high. Among European countries, Sweden has high scores for efficient and sustainable resource use which is attributed to it reaching its targets for three indicators, including share of renewable to total final energy consumption, water use efficiency (265.76 USD per m3, OECD, 2019a) and share of organic agriculture to total agricultural land area (11.9 percent, OECD, 2017b). Among the four green growth dimensions, performance in achieving targets in green economic opportunities is the poorest, with only three countries, namely Denmark, Czech Republic, and Germany, achieving scores between 60 and 64. Scores of other European countries range from moderate to very low. The green economic opportunities include indicators on green investment, green trade, green jobs, and green innovation. Due to the dearth of data for the indicators, no scores can be calculated for many countries, particularly in the African region.

Figure 3 presents overall Green Growth Index results for countries that received scores for all four green growth dimensions. Non-substitutability among dimensions is assumed, so the Index is not computed if the score for one dimension is missing. See chapter 5.8 for further details.

There are 115 countries with complete scores for all dimensions, with 18 percent in Africa, 18 percent in the Americas, 28 percent in Asia, 33 percent in Europe, and only 3 percent in Oceania. The lowest overall score in the Green Growth Index is 16.96 (Sudan) and highest score is 75.32 (Denmark). The scores range from very low to high; no countries have reached a very high score. The 23 countries with high scores are all in Europe. Fifty-four countries have moderate scores in green growth performance, and 36 countries have low scores. A large number of countries in the Americas have moderate green growth performance. The low performing countries are mainly in Africa (14 countries) and Asia (15 countries). Four countries have very low scores for the Green Growth Index including Nigeria, Algeria, and Sudan in Africa, and Iraq in Asia. The top-ranking countries in each region include Botswana in Africa; the Dominican Republic in the Americas; Singapore in Asia; Denmark in Europe; and New Zealand in Oceania. Detailed results for all countries are presented in the statistical tables in Appendix 1 (Table A1.1-13).

Figure 4 presents a green growth dashboard summarizing performance in the different indicator categories for each dimension by region. The performance in natural capital protection, particularly environmental quality (EQ) and GHG emissions reduction (GE) is high to very high in almost all the regions. In contrast, performance in green economic opportunities, particularly in green trade (GT) and green innovation (GN), is low to very low in many regions. Europe performs notably better in all indicator categories as compared to the rest of the regions. Many countries in Africa, the Américas and Asia have rather low performance in sustainable land use (SL). Presentation of more detailed results are discussed in chapter 6. 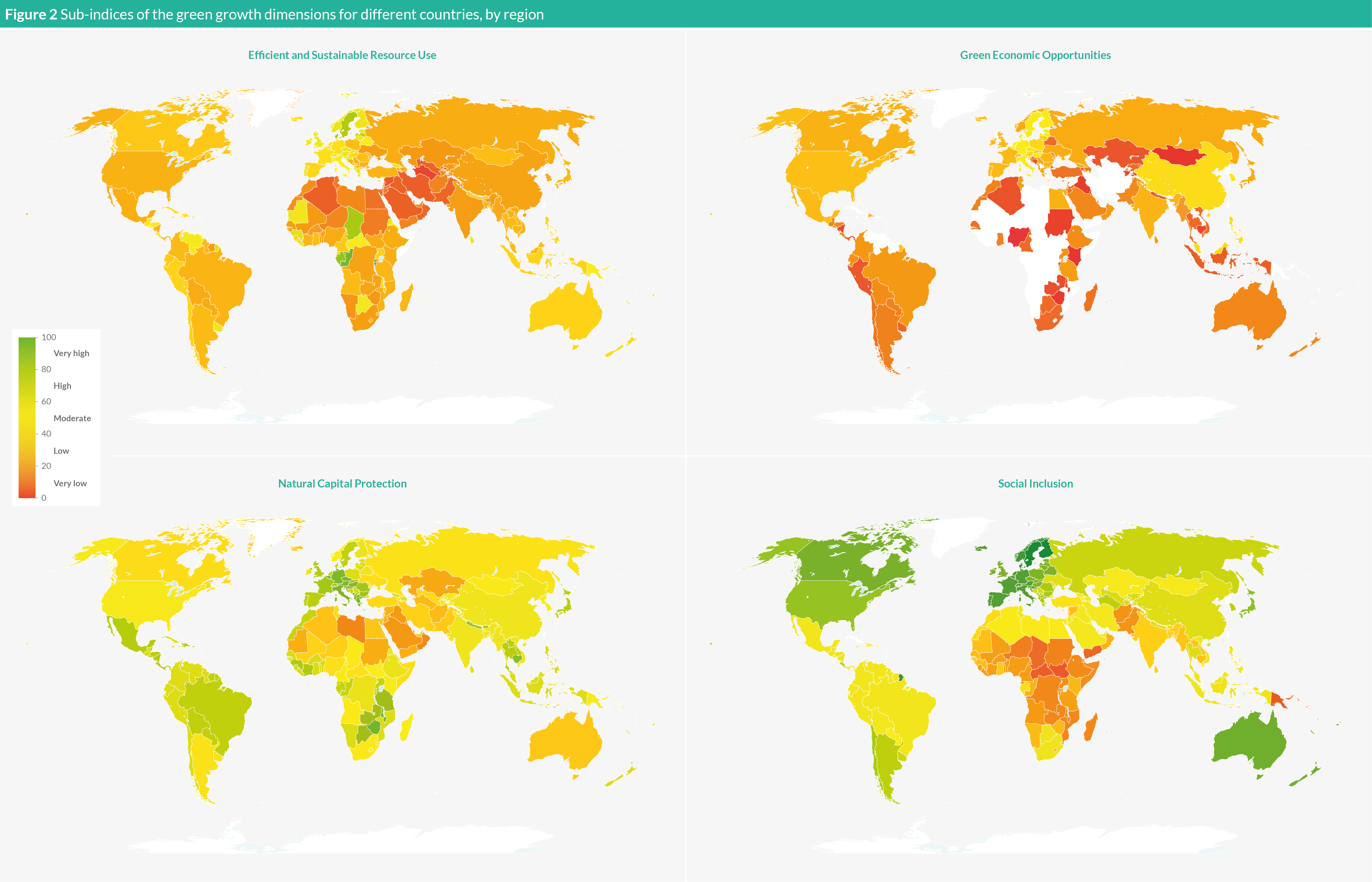 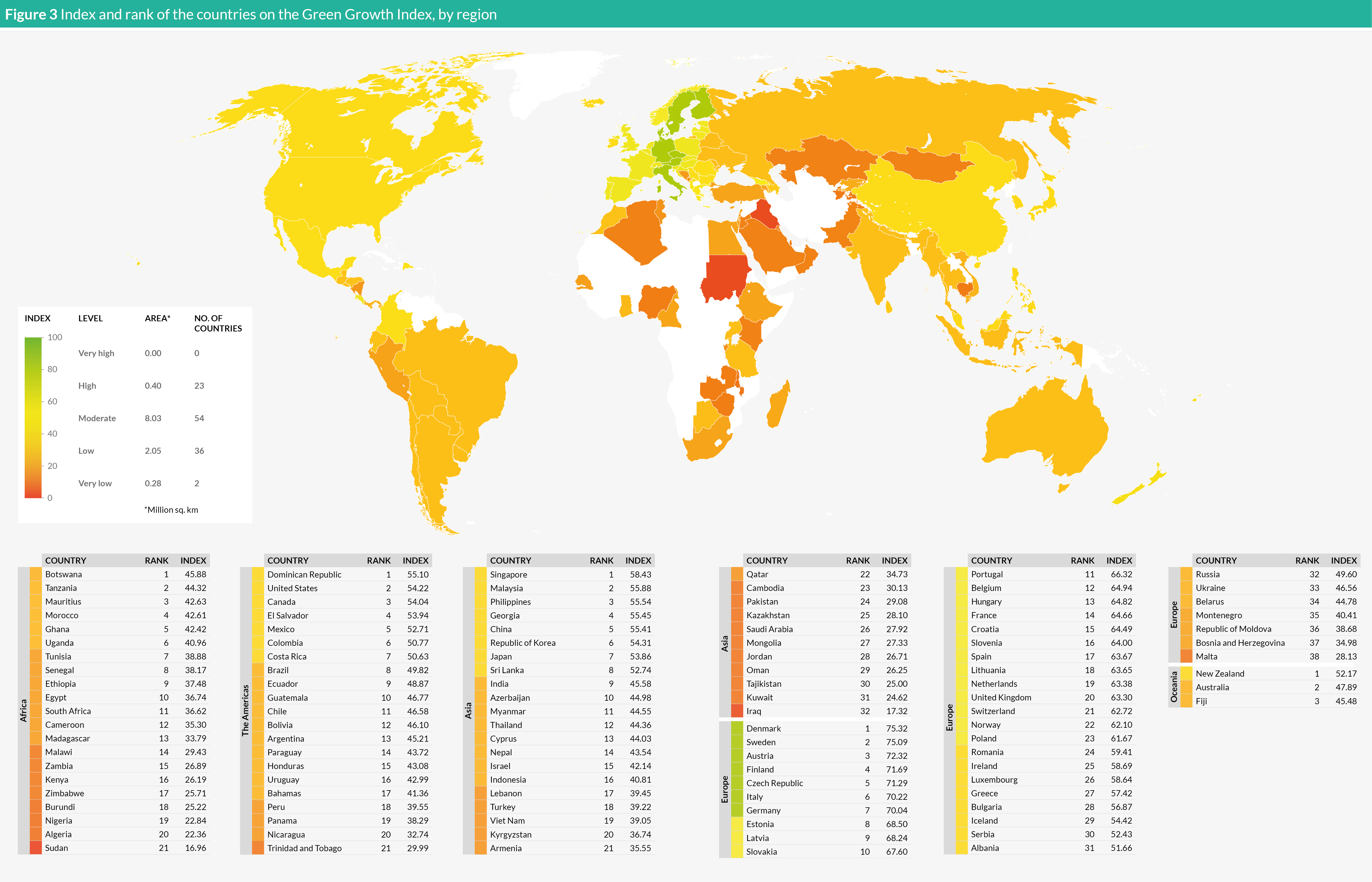 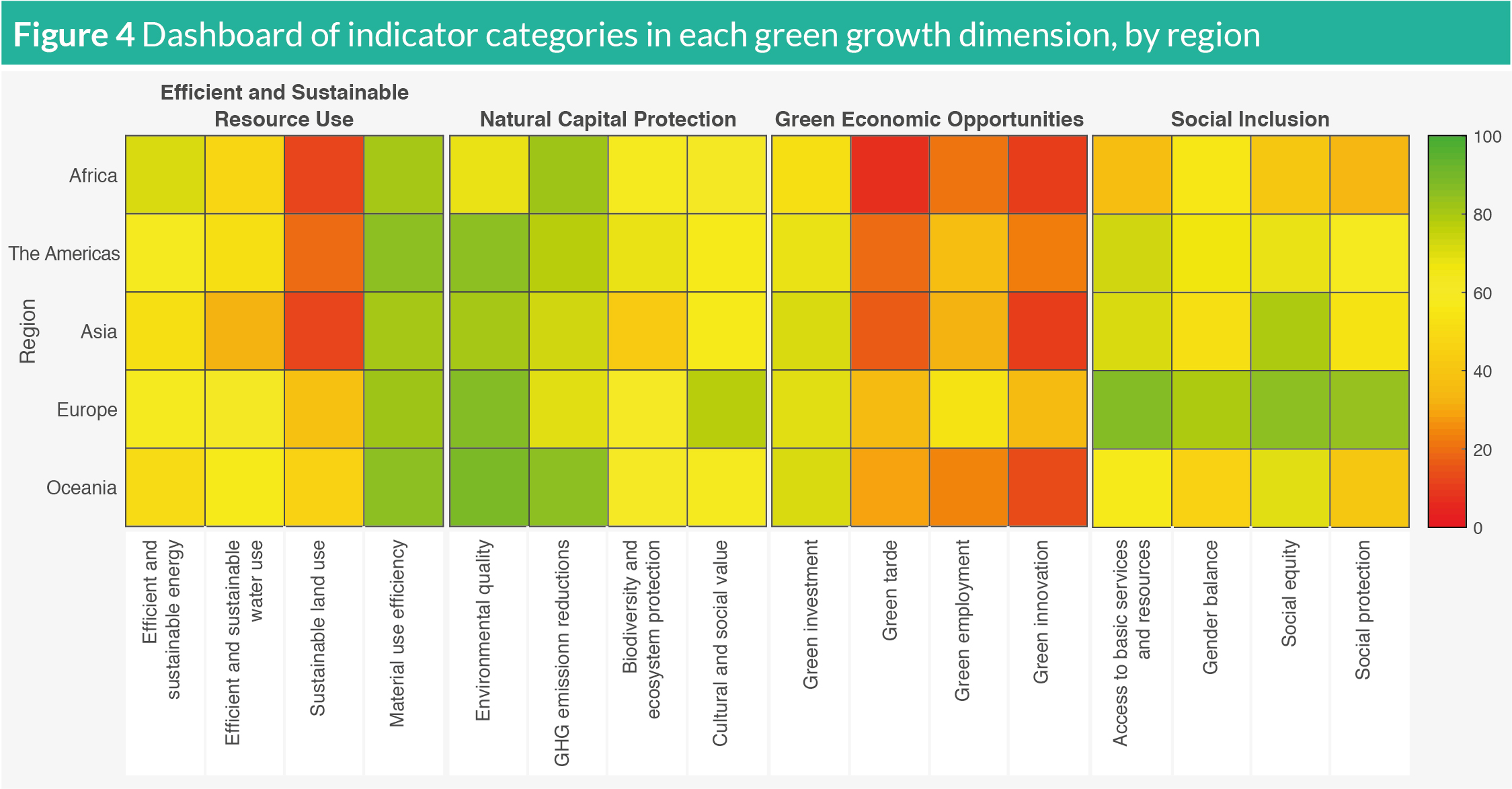